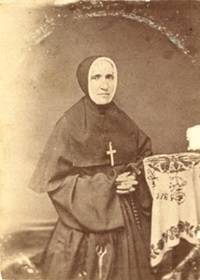 Sister Joseph of the Sacred Heart, circa 1856.

Preparation was in earnest for the missionary party’s departure three days hence. Emotions ran the gamut: concern, elation, anticipation, tearfulness, pride, humility, fear. Aware of her impetuous nature and insecure about her limited schooling, Sister Joseph had questions about her ability to lead her community in the western frontier. In a private moment with Bishop Ignace Bourget, Montreal’s highest prelate and founder of the Sisters of Providence, she voiced her concerns. The bishop had full confidence in the distraught sister. As for doubts about her education and poor writing skills, he handed her a pen—one from no less than Pope Pius IX—blessed it and said, “My child, this will help you with the writing.”

It was during the same meeting that Sister Joseph made a personal vow of perfection. Later, using the pen, she would memorialize her promise on paper, now kept in the archives of the Montreal archdiocese. A translation of it reads:

I, Sister Joseph of the Sacred Heart, wishing to increase love for the Precious Blood of Our Lord, promise in the presence of the adorable Trinity, the Blessed Virgin, Saint Joseph, my Guardian Angel, and the whole heavenly court, to do always according to the light of my conscience, that which seems to me the most perfect, by binding myself to the practice of the third degree of humility, recalling always my role of victim to the Sacred Heart of Jesus.

Made at the foot of the altar of our Mother House with the authority of my ecclesiastical superiors. Feast of All Saints, [Nov. 1] 1856.

It was a powerful statement that epitomized Sister Joseph’s inner life.

The Bell and the River by Mary of the Blessed Sacrament McCrosson, S.P., Pacific Books, Palo Alto, California, 1957.