Four days after leaving Kingston and eleven days into their journey, the sisters and their companions arrived at Aspinwall, Panama, on November 18, 1856.

Aspinwall, known today as Colón, was founded in 1850 by Americans working on the Panama railroad that linked the east and west coasts of the country. It was named after William Henry Aspinwall who envisioned and guided the railroad’s construction in response to the California gold rush. The railroad was completed in January 1855 and with this the trip between New York and California for passengers and merchandise was cut to three weeks rather than the more dangerous and lengthy voyage around the tip of South America or the crossing of the isthmus by mule.

Upon arrival in Aspinwall around 3 p. m., the sisters’ senses were bombarded with similar sights, sounds, and smells as in Kingston, Jamaica.

We must tell you that as we were approaching land, a number of little Negroes were swimming around the little boat, to collect “bits” (small change) from the passengers. These little youngsters, naked, dived like fish into the depths of the water, reappearing on the surface at every minute. As you can well believe, [we] closed [our] eyes and Monsignor [Blanchet] pushed these ugly little wretches further into the water with his umbrella, saying “Go away! Go away you little nasty things!!...” Do not be shocked by this story, while traveling one has to expect all kinds of things. 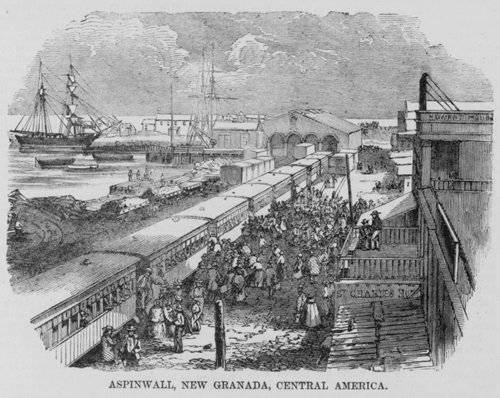 To get to the Pacific coast for their next leg of the journey, the sisters' party crossed the isthmus of Panama, known then as New Granada, from Aspinwall to Panama City. (Wood engraving, illustration in Harper's Weekly, May 30, 1868, Prints & Photographs Division, Library of Congress, Washington D.C.)

The main street in town was crossed by alleys, these covered with planks to aid pedestrian passage. The abundant rain and uninterrupted heat contributed to the oppressive atmosphere. Houses were mostly shanties built on stilts above the soft soil. “Most of the houses only have Venetian blinds all around them, the partitions only go to a certain height, so as not to block the circulation of air,” the sisters wrote. “Having enjoyed the novelties of the country, where everything for [them] was a curiosity...” they retired to the Aspinwall Hotel. Their room, acquired through the efforts of Father Rossi, was on the upper floor where there was “a big bed on which there was a little mattress, about an inch thick, all dirty and disgusting.”

At 7:00 a. m. the next morning, the travelers proceeded to the station to board the Panama Railroad that crossed the isthmus and joined Aspinwall with Panama City, where they would board a boat to San Francisco. The 47-mile, 2 1/2-hour journey was pleasant enough. The passenger cars were furnished with cane-bottomed seats and the sisters’ eyes caught sight of richly-feathered tropical birds, huts built of bamboo, lush vegetation, bogs filled with stagnant, muddy water, and mountain peaks. Before arriving at the port, the sisters were suddenly reminded of the harsh conditions under which their sister missionaries in 1852 were forced to cross this same path.

A few acres before arriving at port we saw mules that reminded us in an even more striking manner the difficult crossing of our poor Sisters, who marked out a route and removed difficulties for us on a path on which so many times they almost lost their lives, we were ashamed to look back and to lose courage in a single instant in seeing what our dear sisters endured. Oh! They must be Saints, those who had overcome these obstacles and their virtue must be great and purified in the crucible of crosses and of suffering...

The train arrived in Panama City around 11:30 a. m. and the sisters, along with the other passengers bound for San Francisco, waited in a depot for a boat to shuttle them to their vessel. Not knowing the steamer’s schedule, they could not explore the city. At 5 p. m., a small ship arrived with the tide and was soon crammed...

…where the passengers were packed together like sheep in a pen. The crowd was so great in the little steamer that it was necessary to remain standing; the heat was so intense that several people fainted... The children were crying. The men were impatient, yelling and cursing for light.

On the evening of November 19, the sisters, exhausted, hot, and hungry, left the confines of the shuttle boat and boarded the SS Golden Age, for their journey to San Francisco. The Golden Age, the fastest steamer of the Pacific Mail Fleet, sailed the San Francisco-Panama run from 1854 through 1869. The ship’s typical manifest would identify approximately 100 first- and second-class passengers, more than 400 unidentified souls in steerage, and cargo of U.S. Mail, packages, and gold coin.

Finally, evening having come, we had to climb the big rope ladder that placed us on the deck of the Golden Age. A luxurious steamer, whose magnificence and comfort were in great contrast with the Illinois, which we had taken from New York and which was most filthy. We were given a family cabin where the five of us were together.

The voyage to San Francisco had begun.