Before retiring the previous evening, Bishop Blanchet asked the sisters to prepare the altar for Mass the next day, December 9. It became more and more obvious to the sisters why he was reluctant to describe to them “what he had and what he did not have.” In a settlement where basic necessities were meager so too provisions for the diocese, the bishop, and the liturgy were improvised.

… Monseigneur charged us with preparing for the Holy Sacrifice of the Mass. This Mass, promised to our Immaculate Mother and which no doubt had saved us from wreckage. But where to do these preparations? The church, a kind of shed, was under repair. His Grace decided that the table that had served us for our meal, would be the altar; the [chapel], nothing more than the corridor that contained the kitchen and which served as a dining room for the venerable Prelate….

Nonetheless, the liturgy provided the spiritual comfort the sisters desired after the exhausting journey and the limited celebration of Mass and reception of Holy Communion.

From the same table that had served to fortify our exhausted bodies, the divine bread was going to nourish our starving souls!... Oh! How sincere are our sentiments of abandonment to Divine Providence while the Sacrifice is offered…. How sweet and burning are the tears that fall from the eyes and from the heart of each one of us! How fervent are our expressions of gratitude to our Immaculate Mother who evidently saved us from peril! How ardent are our supplications to the Divine Heart of Jesus for which we must do everything in our adopted country. And what could we be missing, when He who created the universe is content with so little?… 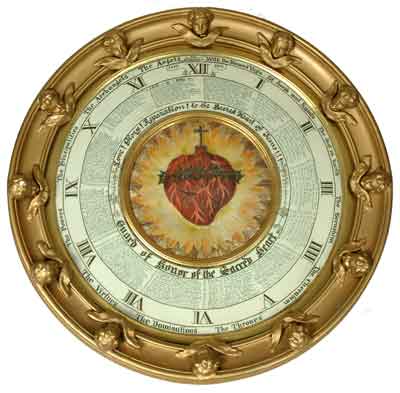 Needlework depicting the Sacred Heart of Jesus found in Bp. A.M.A. Blanchet's attic. Surrounding the embroidery are names of all the sisters who had served in the American West up to 1906, when the artwork was originally displayed during the religious community's 50th anniversary. (Photo by Chris Huss)

Following Mass, the bishop charged the sisters with care of the bishopric and the cluttered attic. What a job it was before them!

We set to work; the church linens and ornaments were the first objects of our care. We found them scattered in the attic, the kitchen and everywhere; the good old housekeeper, who did not know better, used the surplices for her night gowns, finger-towel linens as pocket-handkerchiefs; this pell-mell was no doubt a result of church repairs and the disorder caused by the war with the Indians, during which the church and the bishop’s house had served as a refuge for everyone.

Exploring the objects packed and stacked everywhere, the sisters found religious souvenirs the bishop acquired during his trips to Europe, the United States, Mexico, and Canada.

On looking through the materials for vestments, one of the sisters found a surprising article. It was a picture of the Sacred Heart of Jesus beautifully done in needlework–a real master piece of embroidery! On seeing it, Sister Joseph was astounded. She cried out, “Why, that is the very picture I saw in my mind when, with closed eyes, I promised the Sacred Heart to dedicate an altar in His honor.”

Was it not a precious assurance of the acceptance of [Sister Joseph’s] promise…? Without delay, the image [was] exposed, we burned a candle before it and in unison we made a novena in thanksgiving for the favors received during the crossing and especially to ask for the protection of this Divine Heart on us and on our future works.

As the days passed,

The house cleaning continued and was finished by shaking out the carpets and everything else that could be shaken. The two young sisters began their studies; another took the management of the kitchen, while Sister Joseph and her assistant started sewing and mending the liturgical linens and the clothing of the bishop and the priests.

The sisters’ work was not yet directly to those in need, but it was a start.