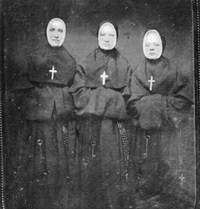 Newly elected superior for the Nesqually mission, Sister Joseph of the Sacred Heart (left) with the two other professed sisters, Praxedes of Providence and Blandine of the Holy Angels, prior to their departure for the U.S. territories (Nov. 2, 1856). Courtesy of Archives Historiques Providence, Montreal

On Friday, October 3, 1856, Mother Caron and her councilors unanimously agreed to accept Bishop A.M.A. Blanchet’s request for a second group of missionary sisters for his Diocese of Nesqually. Sister Joseph possessed valuable skills for a new distant mission and was elected Superior but deliberation continued regarding her companion sisters. Although there were about ninety professed sisters in Montreal, not all were capable of missionary life. Of the remaining sisters, many were eager to be appointed but the community also had need for their talents and labor with the various ministries in Montreal. Deliberations were suspended.

One can only imagine Mother Caron’s concern for the selection of these sisters. It was under her administration that the first missionary group left for Vancouver in 1852 and instead established the community in Chile while on their return trip to Montreal. Now a second group was requested. She must have been apprehensive. But Bishop Blanchet’s offer to accompany the sisters to Vancouver ensured that they would arrive at the right destination with the bishop who requested them rather than the confused arrival of 1852.

At the same time, Sister Joseph must have been anxious waiting to know who would be her companions. How many would be chosen? (The bishop only requested three or four.) What skills would they bring? What awaited them in this far off wilderness? During these long days of waiting it was difficult to prepare when so many questions were left unanswered. In the depths of her soul Sister Joseph was inspired to make a fervent promise:

Lord, I promise Thee to erect an altar to Thy Divine Heart in the chapel of the foundation wherewith Thee hast charged me, if Thou wilt clear away the obstacles which may prevent the fulfillment of this undertaking.

Days passed. The Councilors held additional sessions with no results. Bishop Blanchet lit candles in honor of Our Lady of Seven Sorrows as he anxiously awaited the rest of his “daughters” to be named.

In a seventh session of deliberation, the councilors assembled determined to select the remaining sisters. At the same time, Bishop Bourget stepped in to aid the decision process. He proposed that the councilors either remove the sisters employed at the bishopric and appoint them to the Vancouver mission, or replace sisters taken from other ministries to complete the number of missionaries. The councilors respectfully turned down the Bishop’s offer.

Mother Caron proposed to Bishop Blanchet the following companions for Sister Joseph: Sister Praxedes of Providence (formerly Desanges Lamothe), niece of Bishop Jean Charles Prince, spiritual advisor for the religious community, and Sister Blandine of the Holy Angels (formerly Zephirine Collin), 18 years of age and three months professed as a Sister of Providence. To these three professed sisters were added two women who desired to become Sisters of Providence and to consecrate their lives to the missions: Adelaide Theriault, 30 years old, and Helen Norton, 18 years old. Blanchet accepted Mother Caron’s proposal and on Sunday the councilors confirmed their decision:

The 26th of October, 1856, at an assembly of the Sister Councilors, it was decided by the majority of votes


After 23 days of waiting and deliberation, the five missionary sisters were confirmed.

The selection of these sisters was well considered. Each sister had experience in religious community activities and each brought valuable skills to the new mission. Sister Joseph had worked with the sick, directed the elderly women boarders, oversaw the community’s financial accounts and was Mother Caron’s assistant. Sister Praxedes of Providence had overseen the care of orphan girls and nursed typhus victims. Sister Blandine of the Holy Angels was fluent in French and English and was assigned as Sister Joseph’s secretary. She also had a desire to work with the Native Americans. Adelaide Theriault was an experienced seamstress. Helen Norton was an English teacher at a Providence school which fulfilled Bishop Blanchet’s specific request in the September 24 petition that some of the sisters be qualified to teach English in the schools.

Full preparations for the journey and new mission could now begin.