MOTHER GAMELIN TO BE HONORED

On Sunday, October 7, the day Emilie Gamelin is beatified in Rome, the community of Vancouver, Washington, will honor her with a prayer service at 2:00 p. m., at historic St. James Church, 218 W. 12th Street. The service will include scripture readings, song, and presentations on Mother Gamelin's life and Montreal in the time of her youth; a reception will follow. The Sisters of Providence in the West have their roots in Vancouver, and their years of service at Providence Academy, St. Joseph Hospital, and local parishes continue to be a cause for gratitude among many people in the area. All are invited to join in the celebration. For more information, please contact Father Joseph O'Shea, 360.225.8308.

in the Inland Empire...

Also on October 7, KSPS public television in Spokane will premier "Providence Women on the Frontier," a half-hour film on Mother Gamelin and the origin of the Sisters of Providence in Montreal, Chile, and the American West; the growth of the community and its sponsored works; and the ministries of the sisters today. Producer Bob Lawrence has incorporated numerous historical photographs and artifacts from the archives in Spokane and Seattle. Scheduled air times on KSPS - Channel 7 include: October 7, 6:00 p. m.; October 8, 10:30 p. m.; and November 28, 7:00 p. m. It is hoped that the film will be shown in other areas of the province at a later date, but those in the Inland Empire will be the lucky first audience.

Godspeed to the more than 800 sisters and friends, many from Mother Joseph Province, who will join in the pilgrimage to Rome for the beatification ceremonies. Be sure to take a few extra photos for the archives!

It isn’t every day that the archives collections are featured in a scholarly journal but that is what happened in the Summer 2001 issue of Oregon Historical Quarterly, published by the Oregon Historical Society, Portland. An article by Terri Mitchell, Assistant Archivist, describes the archives and their value to historians and others interested in the development of health care in the greater Portland/Vancouver area. The essay complements a longer piece about the history of Providence St. Vincent Medical Center, Oregon’s first hospital, by free-lance writer Sydney Clevenger. Sydney’s article draws on many primary source documents in the archives, particularly the chronicles, and includes several photographs from the PSVMC collection. Both articles developed out of the medical center's 125th anniversary last year.

The archives website has celebrated its first birthday and is continuing to grow. Check out our new chronology of Providence in the West, featuring selected events in the history of the sisters and their sponsored works in Mother Joseph Province. Also new is the collection description for Providence St. Amable Academy/St. Michael School, Olympia, Washington, which was founded by the Sisters of Providence in 1881. The oldest parish school in the Archdiocese of Seattle, St. Michael's is currently celebrating its 120th anniversary and the 50th anniversary of its "new" building.

With an average of more than 30 visitors per day, the website has generated requests from former students and patients, genealogists, and historians from around the U.S., Canada, and Europe. We welcome your comments, questions, and suggestions for what you'd like to see online.

Mother Gamelin's last days were full of activity, and her death was unexpected. On September 10, 1851, she visited the sisters' boarding school in St. Elizabeth, Joliette, about 60 miles north of Montreal. It was warm and oppressive, and Mother Gamelin remarked, "This is cholera weather." After a few days, she said farewell to her sisters: "I now see you for the last time. I have prayed to good St. Elizabeth that you may always love the poor and that peace and unity may always be with you."

At home in Montreal, Mother Gamelin revised some community documents and prepared for the upcoming elections. She invited Bishop Bourget to lead the next Council meeting, as he or another priest had done since the foundation of the community seven years earlier. He responded by authorizing her to preside herself, at this meeting and in the future, asking only that she inform him of major decisions.

Consequently, Mother Gamelin presided--for the first and last time--at the Council meeting on September 22. She spoke of the need to treat the young sisters with charity and kindness, and later in the day gave a conference on obedience to the novices.

The sisters reported that Mother Gamelin was happy and in good health during the evening recreation. But late in the night, she felt severe intestinal pain, and cried out: "My dear Sister, I am going to die. I have cholera." The "dear sister" was Mother Joseph of the Sacred Heart, who had shared her room for some time. Mother Joseph summoned other sisters, the community doctor, and Mother Gamelin's own nephew, Dr. François Tavernier, who confirmed the diagnosis of cholera.

Mother Joseph later recorded her memories of the death of her beloved companion and drew a plan of the room in which "our Venerable Mother Gamelin gave her beautiful soul to God." She recalled:

"Mother Gamelin became ill at around 4:30 in the morning in her small narrow bedroom which formed part of the Sisters' parlor; the wall which separated her from the Community Room no longer exists. The head of her bed was placed in the corner where I saw the Statue of Saint Anthony on my last visit.

"This dear Mother feeling that she would soon die asked to be transferred to the common infirmary so as to avoid all singularity in her regard. This we did without delay, Mother Vincent, Mother of Seven Dolors, and I, who was privileged to be her roommate." (Letter to Sister Rose de Marie, January 17, 2001) 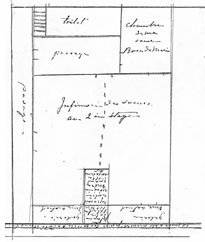 Mother Gamelin refused pain medication, hoping to remain lucid until her death. In the morning, she made her confession to her spiritual director, Bishop Prince, and received the last rites and holy communion. Bishop Bourget bent to hear her final words and conveyed this last testament to the sisters gathered around the bed: "Humility, simplicity, charity. Above all, charity." Emilie Tavernier Gamelin died quietly about 4:00 p. m., Tuesday, September 23, less than twelve hours after experiencing the first signs of illness.

She was immediately placed into a simple pine casket, and like all cholera victims, her body was sprinkled with quicklime to prevent contagion. The funeral took place the next morning in the sisters' chapel, with Bishop Prince presiding. Mother Gamelin was buried in the crypt below the altar of St. Vincent de Paul, whose precepts she had followed throughout life. Bishop Bourget wrote a simple epitaph for her tomb, likening Mother Gamelin to the valiant woman of the Bible: "She hath considered a field and bought it; with the fruit of her hands she hath planted a vineyard" (Proverbs 31.16).

On the 25th anniversary of Mother Gamelin's death, in 1876, Bishop Bourget advised the sisters: "Always remember that the more you recall the memory of your Mother Foundress the more you will live her spirit. You will find it to be a source of charity that unites hearts, a strength that produces devotedness and the desire to practice the virtues that shone in her, especially that of charity." Accordingly, September 23 has become a day of remembrance and rededication for the Sisters of Providence and all who love Mother Gamelin and share in the continuation of her mission.