In addition to Mother Emilie Gamelin's 200th birthday, which was marked throughout the world on February 19, the year 2000 gives us reason to celebrate these major anniversaries:

A beautiful array of exhibit panels at the new Providence Health System Office, in Seattle, tells the story of the Sisters of Providence ministries throughout the American west and the diversity of services offered by the Health System today. The panels were designed and installed by Presentation Design Group, of Eugene, Oregon, which has created similar exhibits for several Providence institutions in Portland and for Providence Centralia Hospital.

By focusing on such themes as pioneering, response to the changing needs of society, compassion, and collaboration, the exhibit panels capture both the deep roots of the Providence mission and the many ways it is extending into the future.

The archives staff worked closely with Michael Whitenack, of PDG, and Cheryl Sjoblom, System Director of Public Relations, to write the stories featured in the exhibit. Most of the historic photographs and artifacts, as well as some contemporary images, are from the archives collections. It was interesting and challenging to research stories and choose photographs to illustrate various themes from both a historical and contemporary perspective. Michael's creative layered design allowed the complex story of Providence to be conveyed through only a few paragraphs of text, several images, and some well-chosen artifacts. 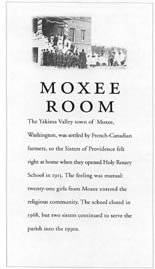 In addition to the exhibit panels, PDG also created signs for the office's fifteen conference rooms, which are named after towns in which the sisters once served. Each sign features an historical vignette.  This sign for the Moxee Room reads: "The Yakima Valley town of Moxee, Washington was settled by French-Canadian farmers, so the Sisters of Providence felt right at home whey they opened Holy Rosary School in 1915. The feeling was mutual: twenty-one girls from Moxee entered the religious community. The school closed in 1968, but two sisters continued to serve the parish into the 1990s." Together with the exhibit panels, the conference room signs present a truly amazing amount of our Providence history.

The new Mother Joseph Province is served by archives in both Seattle and Spokane, Washington. The Spokane facility collects and maintains records for the former St. Ignatius Province; the sisters of Mother Joseph Province living in Idaho, eastern Washington, and Montana; and Providence Services. In addition, many interesting artifacts are exhibited in the adjacent museum. Currently the office is staffed part-time. For more information or to schedule an appointment, contact Sister Jo Anne Jelinski, Archives Assistant, 509.474.7381.

The Seattle facility continues to collect and maintain the records of Providence Health System, the former Sacred Heart Province, and the sisters in Alaska, Oregon, western Washington, California, and El Salvador. Staff members in both locations are happy to receive requests and assist you in locating the most appropriate resources.

In 1902, the first Sisters of Providence to arrive in Nome, Alaska, quickly recognized the important services provided by the ancestors of today's sled dogs. The chronicles record the sisters' admiration: "The dogs of the country greatly resemble the wolves, but they are harmless. They are in great numbers and are very useful in that they search for gold, the main wealth of Alaska. During the winter, they are used for the transportation of the mail for which they travel thousands of miles from Nome.

"The dogs are in renown for their instinct of danger; knowing of a possible storm, they notify their masters with definite signs. Many miners owe them their lives. If one is caught in a storm in the immense plains of Alaska, these animals serve their master as guide and protector."