In this issue:
Meet our "VRA"
News About Mother Gamelin
...and Mother Joseph
Did You Know: Medford's 90th

Peter F. Schmid joined the Archives on April 2, in the new position of Visual Resources Archivist. From his introduction you will see why we are thrilled to welcome this qualified and experienced archivist to our staff.

While I have worked specifically with photographic materials for the greater part of my career, I started in the Preservation Department at the University of Utah’s Marriott Library in 1982 as a part-time employee. There I learned to make custom-fitted clamshell boxes for rare books, and deacidified and encased maps and other material. I enjoyed working with the old and rare materials, but also had an interest in the regional history collections. During this period I learned a great deal about various aspects of special libraries filing systems and resources and performed reference service that would become a foundation for later positions. I then moved to the University Archives to process departmental and administrative records. While I finished my degree in English, I also took and enjoyed a number of history and philosophy classes.

My first full-time archives position was in the Manuscripts Division of the university library. I was responsible for the photograph and audio-visual collections, including cataloging, reference, and collection development. Collections there focused on the history of the Intermountain region and the Mormon Church, Utah mining, the growth of Salt Lake City, and various arts organizations such as the Utah Symphony and Ballet West. One of the greatest honors I had during that time was to assist the authors of a biography of the symphony’s great conductor and musical director Maurice Abravanel. I had the privilege of getting to know the maestro personally. I stayed in this position for four years, became involved in the regional archives organization and began attending professional conferences and workshops.

In the fall of 1991, I accepted the position of Photograph Archivist at Utah State University in Logan, 90 miles north of Salt Lake City. Collections at USU reflect the history of Cache Valley as the agricultural center of the state. I was fascinated particularly by the photographs of depression-era public works programs and the history of water development in the west. In my eight years at USU, I increased my professional development by participating in specialized workshops, including the intensive photograph identification/preservation workshop at Image Permanence Institute in Rochester, New York, and received certification by the Academy of Certified Archivists.

In 1999 I went east to become the Photograph Archivist of the Nantucket Historical Association on the little island located 30 miles off the shores of Cape Cod. While I only stayed a little over a year, I learned a great deal about the history of the whale fishery and the development of Nantucket as a tourist destination.

I was looking to come back out west when I saw the announcement for the Providence position, and was excited to tour the archive at my Christmas time interview last year. I am looking forward to working with Loretta and Terri, and think that we will make a good team. While I am just beginning to explore the depth of the collections, I see great resources and potential, especially for new on-line visual finding aids for the photographs. I welcome your requests and questions regarding use and preservation of our visual heritage.

The Ceremony of Beatification of Mother Emilie Gamelin will be held October 7, 2001, at the Vatican in Rome. Everyone is invited to attend! If you would like to join the sisters and friends on a ten-day pilgrimage to Rome and Assisi, featuring the Beatification ceremony and an audience with Pope John Paul II, please send an e-mail message to jfernandes@providence.org by May 30. Information on itinerary and costs of the pilgrimage will be sent to you as it becomes available.

To learn more about Mother Gamelin's Beatification--the process, chronology, and why she is being honored in this way--visit our History OnLine pages.

The Legacy of Mother Joseph, a two-act play by Dennis J. Sparks, had its world premiere May 6 and will run through May 23, at the Marshall House in Vancouver, Washington. Produced by Heartland Theatre Productions and the City of Vancouver, the play is a witty and touching look at Mother Joseph's life and relevance today, especially for young people. It promises to be a journey of self-discovery . . . for Mother Joseph and for the audience!

Heartland Theatre Productions fosters the involvement of young people and other "new voices" in the arts. Writer/director Dennis Sparks notes: "This show is about, and is dedicated to women. It is also about Legacy, and those who were trailblazers from history, like Mother Joseph, carving paths in the wilderness for others to follow." But he admits his "true heroes" are the women in the cast and crew, and the young actors and musicians with whom he works each day. The Legacy of Mother Joseph reflects her pioneering contributions, but also the importance of imagination and artistic expression in all our lives.

To accompany the play, the archives staff has prepared a temporary exhibit featuring some of Mother Joseph's personal tools and artifacts, on display at the Marshall House through June 7. The exhibit is open 9:00 a. m. to 5:00 p. m. daily (except during private events on weekends - call 360.693.3192).

Mother Joseph has recently attracted the attention of other young scholars. Two high-school students have selected Mother Joseph as their topic for National History Day research, and will be presenting their work in the Washington state competition early this month. Mykah Dehle, of Spokane, Washington, is preparing an exhibit of Mother Joseph's contributions to the development of health care in the region, while Dana Piazzon, of Coupeville, Washington, has created a monologue to reenact Mother Joseph's personal story. Both students visited the archives to research correspondence and many other sources related to Mother Joseph's life and legacy.

No, not the current hospital building, but the historical foundation, first known as Sacred Heart Hospital. On May 26, 1911, three Sisters of Providence took possession of a small, private hospital-in-a-house on the corner of South Central and 11th Street, in Medford. They came at the request of local physicians who traveled to St. Vincent Hospital, Portland, to ask the sisters' assistance in improving the quality of care available to the people of Southern Oregon.

The sisters immediately began planning for a large permanent facility to replace the house. Groundbreaking was held June 7, and in early 1912, the patients were moved into Medford's first modern hospital. The staff of eight sisters, four lay nurses, and two other employees--working alongside the doctors--cared for more than 300 patients in the first year.

Sacred Heart Hospital faced some grim times over the years but persevered and grew to serve the Medford community. The year 1966 brought a move to the present location and a new name, Providence Hospital. This month, the hospital community is celebrating its anniversary with the theme "Ninety Ways of Caring." Congratulations! 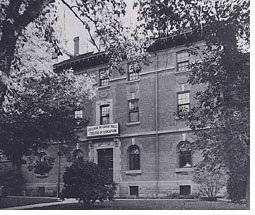