We are pleased to announce that the Providence General Medical Center Historical Exhibit, at Providence Everett Medical Center, has received the 2000 Award of Exhibit Excellence from the Washington Museum Association. The award, presented during the WMA's annual conference, June 16, recognizes the Providence General Foundation and Olson Sundberg Architects for "innovation in all phases of production, including fund raising, planning, design, construction, and interpretation of a unique subject" representing "a level of achievement to which all organizations should aspire."

The Archdiocese of Seattle is celebrating its 150th anniversary this year with a number of festive events and historical publications. The contributions of the Sisters of Providence, who arrived in the diocese only six years after its foundation in 1850, and the Health System have been well represented throughout the celebration in exhibits and resource materials.

The SP Archives staff created an exhibit focusing on historic and contemporary Providence institutions in Washington state. Entitled "Wherever the Providence of God May Lead Us…" the exhibit was displayed at the Women's Day celebration, March 25, at St. James Cathedral, Seattle, and at the Archdiocesan Festival of Faith, May 20, at St. Martin's College, Lacey. The exhibit was well received, as were the fun promotional give-aways provided by Providence Centralia and Providence St. Peter Hospitals. 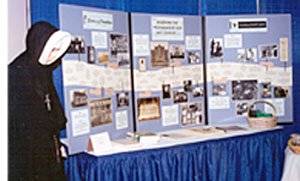 A mannequin dressed in the traditional Sisters of Providence habit brought smiles, questions, and memories during the Festival of Faith exhibit.

Several historic photographs and documents regarding the sisters' arrival and early ministries were also used in a large travelling exhibit, prepared by the Archdiocesan Archives, which toured parishes throughout western Washington. Other Providence institutions will be featured in a history of the Archdiocese to be published later this year.

The last issue of Past Forward neglected to note that Providence ElderPlace, Seattle, will celebrate its 5th anniversary this October. This ground-breaking program of "all-inclusive care" for the frail elderly serves a diverse population in central Seattle. Happy birthday, ElderPlace!

As part of our outreach program, the Archives lends the traditional Sisters of Providence habit to be worn for appropriate occasions. Rene Campagna, Director of Mission Integration, Providence Portland Medical Center, shares her experience of wearing the habit for the celebration of the 200th anniversary of Mother Gamelin's birth in February.

Mother Gamelin's birthday brought her spirit to life in new and remarkable ways for the many people who continue her works of Providence. We re-enacted the early years of Emilie's life, when she set up a special dining room in her brother's house to serve the poor and welcomed her guests to "The Table of the King." In the Portland Service Area, as in other locations throughout the Health System, a simple meal of soup and bread was served in the hospital cafeterias and at other sites. The soup was free, but employees were asked to make a donation to be presented to the sisters for one of their charitable works.

One of the requirements for wearing the habit is that a Sister of Providence help with the various pieces, especially the headdress. Sister Germaine Chabot graciously accepted the assignment. I can still remember the feelings I had as she helped me dress. It was as if the ministry of Providence was being passed on between the generations--from an older Sister of Providence to another generation of lay people, like myself. I am moved whenever I think about it.

Wearing the habit, I made the rounds as Mother Gamelin. During the Table of the King event at Providence Portland Medical Center, I noticed one of the cafeteria staff who was serving the soup. She is a small Vietnamese woman, with a gracious personality. Since we were only serving soup and bread, sometimes she would receive a request for another entrée, like a hamburger. She smiled and replied, "No, today is sister's day. Today we think poor." She understood the true meaning of the day. 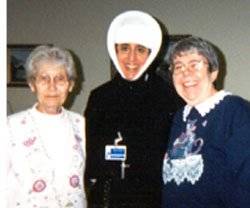 Next, I visited Emilie House, a home for the disabled and elderly, sponsored by the Sisters of Providence and named for Mother Gamelin. When I arrived, the residents were anxiously waiting for the soup to arrive for their Table of the King. I greeted them, and Sisters Alexis Melancon and Florida Hinse, who manage the house, explained the traditional habit. As time passed and still no soup, Sister Alexis remarked, "Mother Gamelin always said, 'Trust in Providence.'" A second later, the catering van pulled up, and the women cheered. I couldn’t help but notice the resemblance of this gathering to Emilie’s own ministry with elderly and disabled women.

After visiting at Providence Child Center, I went to our regional office. As I passed by the room where the Oregon Management Council was holding its monthly meeting, I spontaneously decided to make a visit. I entered the back of the room and quietly stood while someone made a serious presentation. Soon, all eyes turned toward me and there was a bit of laughter. I greeted them, saying simply, "Trust in Providence."

After finishing the rounds as Mother Gamelin, I returned to my usual attire, but something had changed. I felt Mother Gamelin's spirit stronger that day than ever before. Since then, when I need to remember that she is always with us, I just quietly say her sweet name, "Emilie."

We are all children of Emilie. As we continue to pass on the Providence ministry from generation to generation, may we "think (of the) poor today," and always.