After more than two years in the planning, the Providence General Medical Center Historical Exhibit opened on October 27. Located in the lobby of the PGMC Colby campus in Everett, Washington, the exhibit tells the complex and interesting story of both Providence Hospital and General Hospital Medical Center, from the late 19th century until their merger in 1994.

The exhibit was designed and curated by Alan Maskin, of Olson Sundberg Architects, Seattle. Drawing heavily on primary sources, such as the chronicles, oral history and newspaper articles, Alan crafted a beautiful and thoughtful exhibit that captures a century of competition, collaboration, and community service. At times it was a challenge to balance the history of the two hospitals and their contribution to the people of Everett. Alan was assisted by Florence Hanson, General Hospital historian, a committee of Foundation and Board members, and the SP Archives staff.

A highlight of the exhibit is an 11-minute film taken by Sister Anna Foley in 1939, which documents life at Providence Hospital through scenes of a medical staff meeting, patient rooms, surgery, kitchen, sisters' community room, and the School of Nursing. Among the artifacts selected from the Archives are a silver spoon and vase from the original Providence Hospital (1905-1923). Sister Barbara Schiller sewed a traditional Sisters of Providence habit, which stands alongside a 1930s nurse's uniform from General Hospital.

The exhibit is open to the public, and we encourage you to stop by next time you are in the area. Congratulations to the Providence General Foundation, which funded the exhibit, to the PGMC administration, employees, and volunteers, and to the community of Everett for their commitment to preserving the history of local health care.

On September 1, Sister Rita Bergamini stepped into Archives history as she retired from active ministry for the religious community and health system? 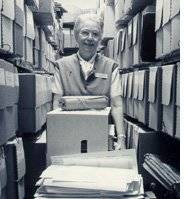 Sister Rita established the archives in 1972, transforming it from an informal storage area into a professional archives for Sacred Heart Province and Providence Health System. She headed the department until 1992, when she assumed a part-time staff position to assist with special archives projects. During Sister Rita's tenure as Archivist, no doubt the most exciting time was the naming of Mother Joseph as Washington State's representative to National Statuary Hall and the dedication of her statue in Washington, D.C., in 1980.

Loretta and Terri express their personal congratulations and gratitude to Sister Rita for her many years of service and her invaluable contribution to the Archives team. We know that even with an easier lifestyle, it will be hard to get the archivist out of Sister Rita's blood, since she plans to work with her family's personal papers and compile a cookbook of family recipes. (Old archivists never die, they just file away!)

The Importance of History

This summer, we were fortunate to have Heather Peterson, a history and business major at St. Olaf College, Northfield, Minnesota, as an intern in the archives. She catalogued artifacts and processed a large collection of negatives. We asked Heather to write a few lines about her experience, and from her response you can tell why we were happy to have such an intelligent and thoughtful intern.

Spending the summer working in the Sisters of Providence Archives reinforced in my mind the importance history plays in every organization, company, or community. Without remember-ing the past, a group has shallow roots that may come loose in the future. A group's history is not some stagnant listing of dates and events, but a living story that is larger than any one individual. The Sisters of Providence serves as an excellent example of this story because your history is filled with generosity, adaptation, and service. The history residing in the archives is not simply a few photographs of sisters on horseback, but the struggles and victories that emerge from almost 150 years of existence.

Most people can tell you how long the Sisters have been around, but fewer really know the story and see themselves as a part of it. The archives reminds me of the accomplishments made throughout the Sisters' history before I was even born and the developments that will occur long after I have left. Working in the archives as an intern, I was fortunate enough to learn about this continuous historical story and glad to include myself in a small part.