In this issue:
Traditional Habits Sewn
Mother Joseph Year Ends
Did You Know That...?
Who's Who in the Archives 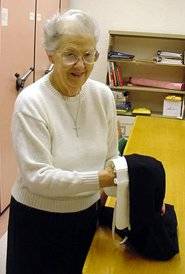 Sister Barbara Schiller displays a postulant headdress she sewed. This type was worn by sisters during their first year of religious formation.

In August 1966, hundreds of Sisters of Providence donned a newly designed habit, the first major change in traditional dress since the religious community was established in 1843. The modified habit – black knee-length jumper-dress with white collar and a veil – resulted from Vatican II directives and the community’s response to needs of the times. In the transition, the old traditional habits were resewn to make the new modified habit. As a result, limited pieces exist of the traditional habit worn by professed sisters and no full dress for the distinct styles worn by postulants, novices and coadjutrix sisters. For the Archives, there has been a lack of documentation of all styles of the habit. Enter Sister Barbara Schiller.

For five years, Sister Barbara Schiller taught novices how to make their habits, crafted personalized patterns, and formalized instructions handed down orally from seamstress to seamstress. Her teaching career included 30 years in home economics, so it was natural to ask Sister Barbara to sew traditional habits for the Archives. This summer, armed with 25 yards of black serge and dedicating four weeks of eye-tiring sewing of black thread on black fabric, Sister Barbara stitched complete new habits for the novice, postulant and coadjutrix sisters. She also completed three sizes of professed sister habits to meet the Archives need to provide habit loans to individuals who represent historic sisters. The Archives staff is most grateful to Sister Barbara for sharing her knowledge and skill to preserve the authentic traditional habits which are invaluable historic documentation for future sisters and historians.

Pocketbook calendar memento for the Mother Joseph Death Centennial, "Whatever concerns the poor is always our affair, Sister Joseph of the Sacred Heart, April 16, 1823-January 19, 1902."
To request a calendar, call 509-474-2300 or email aqualls@providence.org

December 8 marks the culmination of the 100th anniversary of the death of Mother Joseph of the Sacred Heart, commemorating her arrival with four other sisters at Fort Vancouver, Washington Territory in 1856. New reflection prayers were compiled and a checkbook-size calendar for 2003-2005 produced by the Mother Joseph Province Leadership Team was printed as mementos for the entire community. The calendar includes Mother Joseph’s portrait taken in 1856 prior to the sisters’ departure for the Northwest, and her admonition to always care for the poor. Throughout the year, prayer services, artifact exhibits, and a new biographical sketch, among other activities, were developed to remember Mother Joseph’s life and ministry. To everyone who supports the Sisters of Providence ministry, Sister Barbara Schamber, Provincial Superior/Team Leader reflects, “I hope this year has given you opportunity to gain new insight or strengthen your knowledge about Mother Joseph. I thank each of you for the Providence you carry out daily.”

DID YOU KNOW THAT... 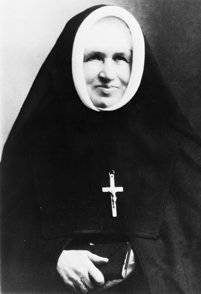 Mother Joseph and her group of missionaries were not the first Providence sisters to arrive in Oregon Territory?

One hundred-fifty years ago, after a difficult journey down the North Atlantic, overland through the Isthmus of Panama, and up the Pacific coast, five Canadian religious from Montreal arrived in Oregon City on Dec. 1, 1852. They came at the request of Bishop A.M.A. Blanchet of the Diocese of Nesqually to establish schools and social services. Circumstances did not favor their staying in this frontier. They had no home they could call their own, no means of livelihood, and limited population to minister to because of the California gold rush. After about two months, they decided to return to the motherhouse. En route, their ship made a stop on June 17, 1853, at Valparaiso, Chile. There the sisters decided to accept the invitation of the people to care for the local orphans. This was the beginning of the foundation of the first House of Providence in Chile.

The foundresses included a young Sister Bernard Morin Rouleau who later became superior general of the Sisters of Providence of Chile independent of Montreal. Mother Bernarda received a presidential medallion of merit in 1925 from the Chilean government. The congregation was reunited with the Canadian foundation and the new province named in her honor in 1971.

Today there are 103 religious active in Bernarda Morin Province. Their ministries in over 20 institutions throughout Chile and Argentina involve education, social services, housing and parish work. On June 21, 2003, in celebration of the 150th year of the arrival in Chile, delegates from Mother Joseph Province will join their Chilean sisters to honor the brave women who made an historic detour through the Pacific Northwest.

WHO'S WHO IN THE ARCHIVES

Starting November 1, Norman Dizon joined the staff as assistant archivist. Before joining the Archives, Norman was information specialist for Light Sciences Corp., a biomedical company in Issaquah, Washington. Prior to that he spent eight years at the Seattle Catholic Archdiocese where he worked in the chancery library, then in the archdiocesan archives. While at the archdiocese, he had the opportunity to connect with the Providence archivists. “Working on projects for the archdiocesan sesquicentennial in 2000 highlighted for me the many contributions of the Sisters of Providence in the history of the local church. The staff was quick to provide hard-to-find resources—even securing from the Montreal motherhouse rare photographs of Tulalip Indian schoolchildren. I was impressed!”

Norman was born and raised in Manila, the Philippines. He was educated in elementary and high school by the Salesians of Don Bosco and received a B.A. in psychology from the University of the Philippines. He moved to Seattle in 1986 and lives on Beacon Hill. Being an immigrant has made him particularly aware of the history of his new home state. That and his love for the written word have led him to pursue a career as an archivist. Welcome, Norman!