On November 23, the sisters and their companions, refreshed spiritually and physically after their brief sojourn in Acapulco, re-boarded the SS Golden Age for the journey to San Francisco. The passengers enjoyed smooth sailing until 30 miles from the city when the serenity was broken by a repeated deafening noise. The axle of one of the ship’s wheels had broken and fell on the sisters’ cabin. “The captain sounded the alarm. What a shock it was to hear this whistle of distress in the middle of the ocean.” This morning event was not something the sisters needed as they were seasick during the night and were caught off-guard in their cabin.

For a quarter of an hour we had heard a noise that was out of the ordinary, but we did not make anything of it. When all of a sudden a bigger noise could be heard, so everyone hastily ran up on deck to see the danger. All night we were really seasick so that in the morning, you can believe we were not in the mood to have such a fright. It was about 11 o’clock when the noise that we previously mentioned could be heard by all, the wheel fell on the side of our cabin, thankfully it was protected by something very strong which prevented it from breaking, the bulkhead was significantly strained to make the rod that was up above fall. Our Mother [Joseph of the Sacred Heart] as well as Sister Vincent de Paul was fully dressed. Sister Praxedes was wearing her neckerchief over her robe and her little cap without the garniture, her cloak, but it is poor Sister Blandine who had nothing to disguise herself with except her night kerchief, so that thank God, she could suitably appear before the fashionable Americans. As such we all hurried into the salon where everyone was agitated, this only lasted a few minutes, we went up on deck to see what it was, with the exception of Sister Mary of the Precious Blood who realizing what she was wearing enclosed herself in the room of a woman who lent her a shawl to return to our cabin. We enjoyed a pretty recreation at our own expense, we had had a good scare and a delay of one day.

The Golden Age resumed a slow journey and finally had San Francisco in her sight the evening of November 30. The passengers disembarked the following morning after the harbor master boarded the boat. 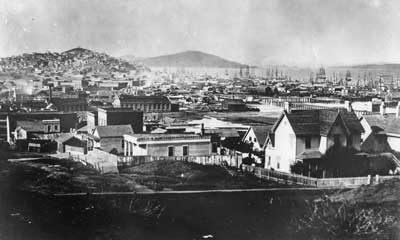 The arrival of the Golden Age meant that it was “Steamer Day” in San Francisco. Once every two weeks, at the beginning and middle of the month, ships arrived with passengers and cargo providing the only direct connection with New York. The days before the steamer arrived were consumed with financial transactions and letter writing as people prepared mail and packages for the ship’s return trip to New York. When the Golden Age docked, merchants and individuals crowded the wharf waiting for mail, packages, cargo, friends and family, and New York newspapers that provided news of the world at large. Finally, news of the election of President James Buchanan that delayed the sisters’ departure from New York City had arrived in San Francisco.

With a population around 50,000, primarily men keen on striking gold, San Francisco was growing. Portsmouth Plaza, surrounded by hotels, the post office, city hall, and a publishing house, was the center of town. Like other cities, there were social enclaves: Little Chile with residents from Latin American countries; Sydney Town with the lower strata of the population; and Happy Valley and Pleasant Valley with manufacturing and homes, schools, and churches. Beyond the limits of the surveyed city was “Washwoman’s Lake” around which much of the city’s laundering was done and beside which the sheets and pillow slips of ocean steamers dried in the westerly winds. Commercial activity took place at the water front so that the city’s business section extended the streets into the wharves, hundreds of feet long.

San Francisco was growing in other ways as well. Following a series of devastating fires (1850-1851) fueled by narrow streets, buildings of flimsy construction, and no water supply, the city transitioned from tents and shacks to brick and stone buildings. Until 1857, public water was still obtained from peddlers around town for 25¢ per bucket. And, the city was plagued by crime replete with murder, election fraud, political cronyism, farcical court trials, and loose living that brought about the organization of the 1856 Committee of Vigilance with its own form of direct action to clean up crime.

Following the carriage ride, the Sisters of Providence “arrived [at the Sisters of Mercy convent] in time to hear Mass and to receive communion. They gave us two rooms.” The convent was located across the street from the County Hospital on Stockton and Vallejo Streets, managed by the Sisters of Mercy, and about 6 blocks from St. Mary Cathedral, California’s first cathedral. The Mercy sisters “cordially and affectionately welcomed” the travelers “in a way that reminded us a lot of our dear communities in Canada.”

The first day we had great recreation at mealtime and everywhere, even in the corridors. The next day it was close to 9 o’clock and no one was talking of recreation. I asked the Mother Superior for it, just until our departure. Every evening, big concert, dances in the round, etc., etc. A few minutes before prayer, together with the Novices, we asked for a quarter of an hour and then like the Novices of Providence we did not waste a minute. These good sisters were for us what our missionary sisters are for the sisters of the communities that they visit, the same cordiality, the same sympathy, they are not embarrassed and are completely sociable. Our Mother [Joseph of the Sacred Heart] and Sister Praxedes could not help themselves from saying that they regarded this good reception of foreign communities like a reward for the hospitality which we have on occasion had the happiness of giving at our dear communities.

On the third day, Father King took the sisters to visit churches in the city as well as the Sisters of Charity and the Sisters of the Presentation. It was a journey filled with spirituality, thoughts of the sisters in Chile, and a foretaste of those to whom they would minister.

The third day of our arrival at San Francisco, the good Monsieur King took us to visit an old church, previously belonging to the Franciscans, built in 1760, about 180 feet in length by 40 to 50 in width, in the middle of the main altar is the statue of Saint Francis of Assisi, as well as a great number of others representing the sisters of this order. In the sacristy we see a crucifix that has an expression of sorrow capable of softening the hardest of hearts, of a bluish color, like bruised flesh, holes in the knees where blood runs all the way to the floor, it is a perfect piece of workmanship….

Then we went to the Sisters of Charity who took us to visit the house as well as the little room that our first sisters of Chile occupied, which again gave us some very bitter memories. The little orphans sang the psalm Dixet Dominus while one of the older ones among them accompanied on the harmonium.

Next we went to the Sisters of the Presentation recently arrived from Ireland [November 1854]. When these good sisters arrived in San Francisco, they were rebuffed by everyone, even by strange messieurs who told them that there were enough religious in the city. They had but a miserable lodging where they made their home, so much so that they spent a long time deliberating on their return, but finally Divine Providence, who never abandons those who trust in her, made it so that a few people took interest in them and three months later they had a house worth 25,000 piasters, that did not cost them a cent. These good Sisters provided free education, they taught music, drawing, painting, needlework, and all sorts of classical subjects.

We arrived back at the Sisters of Mercy in enough time to have the salvation of the Blessed Sacrament, which in its chant quite resembles that of our dear community. Around 4 o’clock that same day, an assassin requested permission to enter the hospital. Having his ticket of admission [a form of pre-paid health care] he entered and two hours later he stabbed himself in the heart. He made a wound 3 inches deep. The sisters, noticing this, called the doctor who asking him why he had reacted in such a way, replied that believing he was going to prison, he could not think of a better remedy than suicide. Seeing that he was becoming more and more weak, the sisters asked him if he wanted to see his minister. “No minister,” said he, “I do not have a religion and besides, there is no time to do anything.” The sister who was talking to him told him how he should hope for the mercy of God, grace touched him, he asked for a priest. Monsieur King, finding himself there, baptized him…he showed sincere repentance. When we left he was not yet dead.

As the day ended, so did the visit of the second group of Providence sisters in San Francisco. In the morning, they would prepare for the final journey to Fort Vancouver.