The sights and sounds of San Francisco life that Sisters Joseph of the Sacred Heart, Praxedes of Providence, Blandine of the Holy Angels, Vincent de Paul and Mary of the Precious Blood witnessed were a harbinger of life in Washington Territory, their final destination. San Francisco was their first exposure to a quintessential western American city, quite distinct from cities in their native Quebec or in the northeastern United States. Its economy moved in fits of boom and bust; its demographic primarily masculine and highly diverse, ethnically and nationally, consisting of Americans, Mexicans, Chinese, southern Blacks, American-Indians, Irish, French, Australians, Chileans, and others. 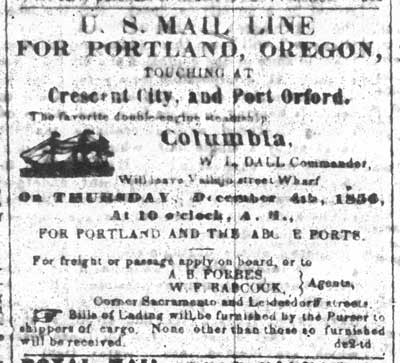 Notice in the San Francisco newspaper The Daily Alta California on Dec. 4, 1856, announcing the departure of the steam ship Columbia. The Providence sisters and companions boarded this vessel destined for ports on the Columbia River, including Fort Vancouver. Many previous accounts, found in chronicles and published works, have erroneously referred to the Brother Jonathan as the ship that carried the sister-foundresses on this final leg of their journey. However, the above record and other research definitively contradict this claim. In 1856 the Brother Jonathan was plying the Nicaragua-California route only.

San Francisco and environs in many ways provided a microcosm of the Pacific Northwest: expanses of unsettled regions, nature of great beauty and forbidding harshness, tensions between Catholics and non-Catholics, low numbers of women and children, local folk’s permissive “morals” and way of life, among others. However, San Francisco, unlike their destination of Fort Vancouver, had a long history as a Franciscan mission since the 18th century. By 1856 it had a new Gothic cathedral, burgeoning outlying parishes and schools, clergy on the increase, and at least five communities of women religious taking root. A far cry from Vancouver’s Diocese of Nesqually (covering what is now Washington, Idaho and western Montana) with no women religious to speak of.

Around 10 o’clock the morning of Thursday, Dec. 4, the five sisters, escorted by Bishop A.M.A. Blanchet, his secretary Father Louis Rossi, and servant Moïse Loisel, were saying goodbye to the city. In the bustle of departure and leave-taking aboard the SS Columbia, Sisters Blandine of the Holy Angels and Mary of the Precious Blood, both 18 years old, and eager-to-please Moïse succumbed to last-minute distractions. What happened left worrisome consequences for the latter and the rest of the party mystified. The tale is related in the chronicles of the Vancouver House of Providence as recalled years later:

Monseigneur [Blanchet], who knew how difficult it was to procure a servant in Vancouver, had brought with us Moïse Loisel…This poor Moïse was what we would call of “a simple spirit”, but he had an irreproachable loyalty. Now, would you believe that while we were waiting for the boat to depart, Sisters Blandine and Mary…like the two children that they were, asked him to go get them some popcorn and candy, which they had seen nearby?...There our man left! But, not being content with what he saw, he went further away to find something better and returned in a hurry. But, oh! A frightful disappointment, the steamer had left. The poor wretch yelled…“Monseigneur! Mother Joseph!” but in vain. In his distress he hired a boat to race after the steamer…We looked everywhere for him, but in vain. Imagine our surprise and our concern. What happened to him? Did he fall overboard? During our thousand conjectures, our two little children kept a profound silence; their little secret was theirs alone.

Moïse would arrive 15 days later in Vancouver (after lodging with their host Father Michael King until the next passage). He served as the sisters' baker—practically their first lay employee. In 1859 he left Vancouver and traveled to Chile where he worked for the Providence foundation there, eventually marrying a Chilena and raising a family.

In the sisters' minds, San Francisco remained ingrained as a vibrant western city, the place where they almost lost their baker, and a lens to the possibilities of their future in the Northwest.