Off the Oregon Coast & into the Columbia River: The Howling of Dogs, December 6-7, 1856

After leaving San Francisco, the SS Columbia made calls at Crescent City, California, and then at Port Orford, Oregon, at 6:00 a. m. on December 6.

Considering the vagaries of 1850s travel by sea, the sisters and their companions had enjoyed a relatively calm voyage. That was about to change. In his memoirs, Father Rossi ironically remarked that “It was the month of December and we were traveling towards the north, which meant that we could do equally well without fans or iced water.” The available accounts of this portion of the journey differ as to exact times, but suffice to say that the 6th and 7th of December were harrowing days.

In the early morning hours of December 6, black clouds began to gather and the ship’s crew let down the yard arms and began tying down everything on deck. Freezing rain poured out of the sky, and the ferocious storm battered the Columbia and quite literally struck the fear of God in the sisters (with good reason; there were dozens of shipwrecks off of the Pacific coast in the 1850s). They suffered extreme seasickness, and one account notes that “Sister Joseph in particular believed she was going to die.” Sister Blandine of the Holy Angels later wrote:

Mountains of water came crashing against the ship, which at each instant seemed to be swallowed to the bottom of the raging sea. The roaring of the sea in these big storms quite resembled the howling of dogs in the calm of the night. Finally, we cannot describe how frightening it is. We were obliged to stay in bed all night so as not to fall…everything was overturned by the rocking of the vessel. All night Sister Praxedes said to me, “Sister Blandine, are you scared?” I pretended to be brave and replied, “No, I am afraid of nothing, I am sleeping peacefully. Actually, if we perish we will arrive all that much cleaner [because of the water] in Heaven, to celebrate the Immaculate Conception.” The entire time I was praying with all my soul and in vain I said to Our Lord, “Do what you did to Saint Peter, stop the storm, Lord.” He did not hear me so I appealed to the Blessed Virgin, the angels and all the Saints in Heaven and on earth. It had been a long time since I was that fervent. ...Sister Praxedes said to me again, “I have exhausted all my prayers poor Sister.” I said to her that it was about time to start over. I did everything in my power to reassure her. She was dying of fright. That poor girl was all frozen and disfigured from shock that increased with each new clap of thunder. Weakness forced her 3 or 4 times to lie down because she was fainting. His Grace, seeing the danger, promised a mass in honor of the Immaculate Conception, our mother seeing the state of Sister Praxedes promised to burn a lamp to the Sacred Heart and to do an hour of adoration. 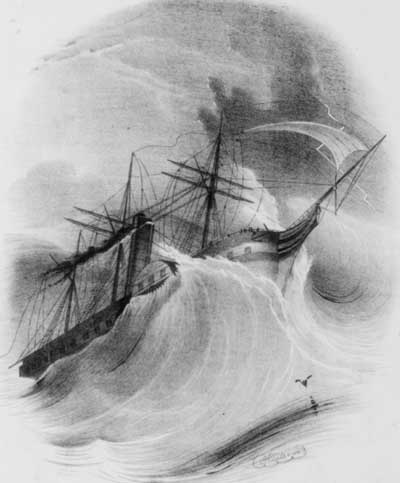 The ship reached the mouth of the Columbia River at about 1:00 a. m. on the 7th, but did not attempt to cross due to the storm’s fury. Father Rossi describes the view of the shore where river meets sea as “grandiose, solemn, frightening”:

Imagine an enormous row of waves breaking for a distance of three leagues from Cape Disappointment to Point Adams, and forming a kind of sandy crescent about 1500 meters long at the river’s mouth. The sea water, whipped in by the wind towards the river mouth, encountered the river water on this enormous sand bar, producing a frightful impact; the noise is so loud that you can hear it several leagues away, and the mountainous waves—resulting from the meeting of the two opposing currents—reach a height of sixty feet.

It was in the middle of these mountains—made more frightening by the hurricane—that our ship was. If the engines had then had the slightest mechanical difficulty, that would have been the end of the ship and of us…The sight of our steamer was—simultaneously—picturesque and dreadful. The waves, coming furiously from opposite directions, seemed to be competing with each other for the satisfaction of burying us in the abyss. In the winking of an eye our vessel was thrown—prow pointing to the sky—on to a watery peak; and just as suddenly, the treacherous water would slip from under it, letting it fall to the bottom of the trough, threatening to swallow it up. One time, we thought we were done for; the keel rubbed against the sand bar, and the ship took a leap which turned several passengers upside down.

Finally, at about 5:00 p. m. on December 7, Commander W.L. Dall powered the Columbia across the treacherous sand bar and steep waves where the water pushed into the Pacific. As they plied their way east up the river, Sister Blandine played the Stabat Mater on the accordion given them by the Sisters of Mercy in San Francisco, and memories of home were never far:

…we noticed 5 little springs that were coming out of the rocks and returned to the river in the form of blades, similar to those beautiful fireworks that we see sometimes in Canada. It made us think of the 5 wounds of Our Lord from which torrents of blessings never cease to flow. This little river resembles a lot the one in Chambly. Despite all the pains and fatigues of traveling one always encounters something that shows us the infinite wisdom of our Creator and His love for us in creating so many beautiful works to attract our hearts.

The sisters and their companions anchored in Astoria overnight, having survived the most harrowing part of their voyage. Tomorrow they would make the final leg of their journey to Vancouver.